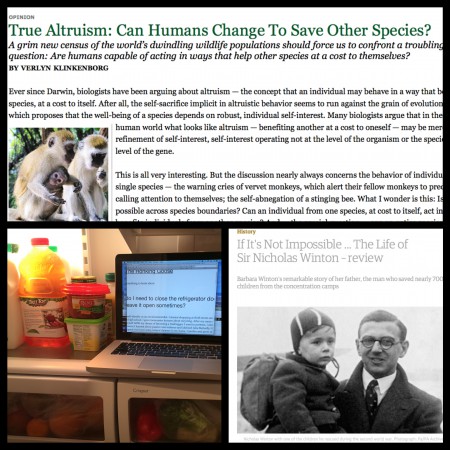 January 7, 2015 JANE Ecology, Nature, Nature Issues, Nature Literacy, Oregon Master Naturalist, unless-we-care 2 comments
I’ve been tossing the relationship between these three ideas around in my mind for a while. Publishing this post has been delayed several times with the hopes of going-public only when clarity of expression felt “polished.” However, that may not be possible… the reality just may be that messy thinking is necessary to tie three seemingly unrelated ideas together into the cohesive message that I see in my mind’s eye.

Each topic was derived from media stories I encountered over the course of the same week.

It is because they represent three concepts that, when combined, create a powerful dynamic…
one that can affect crucial changes in our ecological attitudes and actions:

For this post, I ask a favor of you. Please alter usual blog protocol and slow the pace of reading down to take time to click the links associated with each of the sections below.  Skimming the linked articles will provide first-hand looks at the ideas that inspired the thinking behind this piece.

Altruism: Grim Reality   True Altruism: Can Humans Change to Save Other Species?

I’ve heard a lot of questions in my life. A set of questions asked by Verlyn Klinkenborg caught my attention, and is the impetus for serious reflection:

Why does Dr. Klinkenborg ask these questions?

It’s because he read the WWF International report- Living Planet Report: 2014*, and it angers him. And so too, it should anger every human on the planet.The report is a census that provides population data for aquatic and terrestrial animals on planet Earth. The report is staggeringly grim; as the following graphic indicates:

Bottom line… since 1970, we’ve destroyed HALF the animals on this planet. Let me state that again…

The number of animals living on Earth has dropped by half since 1970. The decline is largely from habitat loss/degradation due to farming, urbanization, and human land-use impacts. Hunting and fishing also play a key role in animal population decline. Another graphic from the World Wildlife Federation illustrates the pressures humans place on other of Earth’s living creatures:

Klinkenborg’s grim commentary is meant to emphasize the FACT that life and diversity on our planet is FAST vanishing. We must be aware of the extreme circumstances we face in order to act. Like it or not… humans have become an invasive species. Efforts to act altruistically toward other species’ survival will ultimately rest on our shoulders.

*World Wildlife Federation “Living Planet: Report 2014“ click on the link for more details. The report is written in both summary and complete PDF formats.

Open Refrigerator: Introspection  Do I need to close the refrigerator door or can I leave it open sometimes?

A post written in The Honking Goose a while back caught my attention. I hope you stopped for a few moments before getting to this sentence and took the time to skim the post that I linked (with permission from the author)- Do I need to close the refrigerator door…

If you did… can you identify with the sense of overwhelm expressed? Many of us deeply desire to make environmentally/ ecologically sound decisions and to perform Earth-nurturing actions… but end up feeling lost in feelings of doubt or confusion. Our attitudes and values move us toward eco-alturistic action, but the impact of becoming overwhelmed threatens to produce apathy and challenges the ability to act. There is no denying- Environmental challenges are both numerous and serious.

I appreciate the introspection and reflection The Honking Goose shares of her awareness of Earth’s issues and her desire to make a difference. She realizes the importance for taking action for future generations. And… asks another key question,

“But what about now?”

What will allow Klinkenborg’s call for altruism, and The Honking Goose’s confusion to merge as inspiration for action?

Although Nicholas Winton’s altruism involved saving members of his own species… I believe his life motto and the actions he took model the qualities that humanity will be required to muster to solve challenges like: climate change, habitat degradation, ocean acidification…

Did you click on the If It’s Not Impossible link? If not, Sir Nicholas Winton saved 669 children from the Nazis in December 1938. He did so without seeking recognition. His altruistic actions would have gone unnoticed had it not been for his daughter’s discovery many years later- of a notebook that he had kept crammed with documents, photographs, and a list of every child he saved.

How did he accomplish this? By following an often-repeated motto:

“If it’s not impossible, there must be a way to do it.”

“Speaking at his 105th birthday… Winton expressed his belief that goodness properly understood is not passive, but active – that the world requires individuals who not only refrain from harming others, but energetically seek out those in need of help.”(Cut from: If It’s Not Impossible 01-07-14)

Winton’s actions and wisdom resonated in my head and heart. This motto need not apply only to humanity, but also to the Natural world.

Inspiration & What it means to me

The combination of these three media stories help in the challenge of looking for a way to make a difference. I believe each contains a key lesson. This is a keystone post for me. I am inspired by the realization that the eco-altruistic call to duty can lie only as far away as one’s own home or neighborhood.

If each of us finds a niche… remains focused to turn efforts into a groove… that grows into a channel… the collective efforts will make a difference. Perhaps then, altruistic efforts will flow beyond our own species and out to others- fauna, flora, fungi…

I’ve decided to create a grassroots environmental stakeholder group in my neighborhood. My first goal is to educate neighbors who live in our wetland area to be aware and understand the biodiversity of wildlife habitat nearby. Then, as interest grows, begin collaborative planning for riparian preservation, restoration, and vigilance.

I will share my journey from this point forward.  The steps and experiences I take as a neighborhood naturalist will be shared in future posts.

What environmental or ecological need inspires you where you live? How can, or do, you take action?